How to Set Up Feed to Post's Image Options 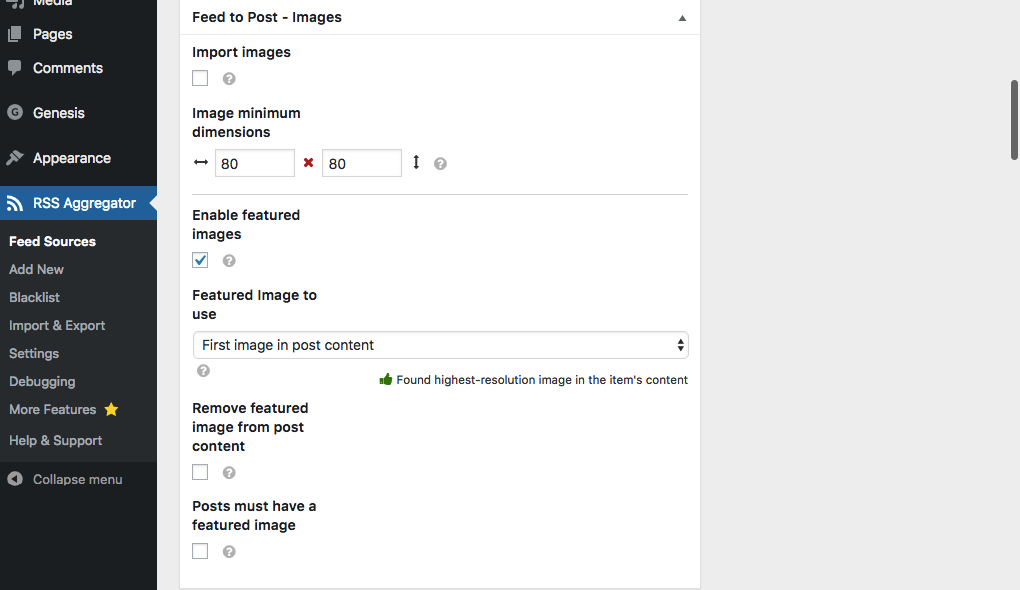 These options give you the ability to choose how images are handled within Feed to Post.

The Images options can be found in the following two places:

NOTE: The options chosen for an individual feed source will override those in the general Feed to Post settings.

From each of the above two areas, you can choose the settings for image importation and the setting of featured images.

Check this box to import the images from the posts into your local media library. If this is left unchecked, you will be using the original image from the original source. If these images are removed by the source, they will be missing on your site too. When importing images to your site though, it's best to ensure that the source gives you the right to do so.

Here you can set the minimum size that you would like for imported images (in pixels). This option applies to images saved in the media library as well as the featured image.

Check this box to enable featured images for imported posts.

NOTE: When selecting this option the image used as the featured image is imported into your site, even if the “Import images” setting is unchecked, as this is the way WordPress functions.

Featured Image to Use

Via the dropdown, you can set whether you want to set the featured image from the:

Please consider the following when selecting an option for which image to use:

We have also provided a few Advanced Image Handling tips for you to modify the imported images even further.

Depending on your theme, the single post template may or may not display a featured image at the top of the page.

Some sources also include their featured images at the very beginning of their content.

If both of the above are the case on your site, it may cause a featured image to appear as duplicated at the top of the individual post page. When this is the case, ticking this option will remove the featured image from the post content, ensuring that there are only one of these images being seen.

Posts must have a featured image

In certain cases, you may only wish to import posts that will look good on your site. When your theme relies a lot on imagery, a post with no featured image may look out of place.

By ticking this option, any post from the RSS feed that has no images will be skipped. This ensures that your website has a consistent look, always showing posts with images. Those without images are not imported.

Fallback to Feed Image (only in the general settings)

Check this box to use the feed channel’s image, if available, before resorting to the feed source’s fallback image.